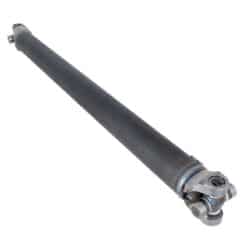 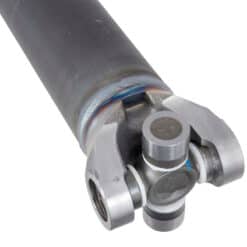 Should be taken on level ground, full weight on all four tires, vehicle at ride height, and pinion angle set. If the rear yoke is smaller than a 1350 series, it may be the time to replace it before proceeding. The driveline is only as strong as the weakest link and a new yoke will change your measurement.

DRIVESHAFT ONLY – NO TRANSMISSION YOKE: Push the transmission yoke all the way in until it bottoms, pull it out 7/8” and measure center to center. This is the ”C” dimension. If you are not using all 1350 series yokes, supply the “D” and “E” from any that are not and note which end they belong.* Your transmission yoke will need to be sent-in to properly balance the driveshaft.

Driveshaft Critical Speed – Defined as the lowest rotating speed at which the natural frequency of the driveshaft is reached. Centrifugal force excites the driveshaft causing extreme vibration which can lead to catastrophic failure.
1/2 Driveshaft Critical Speed – Vibration of a driveshaft can occur at rotation speeds centered around 1/2 of of the critical speed. This occurs because the standard U-Joint cycles or rotates twice for every one revolution of the driveshaft. This applies more to street cars with longer driveshafts that will see cruising or highway driveshaft speeds at or near the 1/2 critical speed. If this is a problem several steps can be taken to combat this vibration.

The table is based on the following information:

There are no reviews yet.